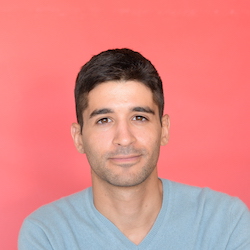 Daniel is a self taught software engineer who spent over two years studying for programming interviews. As the only person he knew studying, the process was lonely and often isolating when he had to skip out on social events and get up 3 hours before work to get his studying in. He often felt burnt out and would study consistently for two months before taking a month off.  The process was long and grueling but eventually paid off when Daniel received offers from Facebook & Google.

At Facebook, Daniel frequently conducted technical interviews. As someone who went through the process himself, he was able to provided honest feedback to all of the interviewees to help them grow.

After a few years, Daniel left Facebook to go through Y Combinator and after a company pivot, Hackpack emerged. His goal was to create an environment where engineers could go through the programming interview process with everything he wished he had when he was studying. Hackpack was created to provide support and beat burnout during a time of stress.

The 4th part in a 4 part series on how to approach every programming interview, regardless of the topic.

How to Master Programming Interview Concepts

Breaking down the five stages (Zero, Research, Repetition, Refinement & Master) and how to move through each one efficiently.

How I Got Over Imposter Syndrome While Working at Meta

How I got over imposter syndrome while working at Meta. I had worked towards this goal of working in Big Tech for so long, that it was hard for me to believe I actually got there. Post-imposter syndrome, I can now share some advice for anyone who may be experiencing the same thing.

3 Things I Learned After Failing my FAANG Interviews

When I got my first interview at Google, I had 0 engineering experience. I went through the phone screen and completely failed, realizing that I was way less prepared than I had imagined. Right after I failed, I put an invite on my calendar for exactly a year later to follow up with the recruiter and reapply. I failed again, and then decided it was time for a change in my study habits.

Coding interview advice from a software engineer at Microsoft

Hackpack founder Daniel Habib interviews Hackpack Alumnni Leo who just got a job at Microsoft. They discuss how he got the job, the resources he used, and advice for anyone who is currently studying for programming interviews.

6 Tips for Staying Focused when Studying for Programming Interviews

It is no secret that the process of studying for programming interviews can be quite isolating. Not only do you have to worry about the material itself, but also the pressure of needing to perform well in order to get a job offer. This can lead to a lot of stress and burnout, especially if you are not used to this type of environment. We discuss some tips to help you stay focused as you study.

How to ask your interviewer questions that make you stand out

How to pick a side project for coding interviews

How do you know if you're picking a project that is impressive and going to help you get an interview? Here are a few tips to help you optimize your projects when applying to Big Tech companies.

Are you ready for your FAANG interview?

Here's a quick list of questions that you can ask yourself to help you figure out if you are ready for your FAANG interview.

Why Mock Coding Interviews are Important

Everyone knows that you need to know data structures and algorithms for coding interviews, but sometimes people neglect the other key skills required to land the job. In this post I’ll break down what these skills are, offer some guidance on how to get started, and share a resource for free mock interviews.

Sign up to receive programming interview tips directly to your inbox!
‍

Thank you! Your submission has been received!
Invalid Email. Please try again.

Company
BlogMock interviewsEngineering BlogsSystem Design Problems
About
Why we started HackpackThe community
Thank you! Your submission has been received!
Oops! Something went wrong while submitting the form.
© 2022 Hackpack.io. All rights reserved